The big news this week in the office-imaging industry was undoubtedly reports that Japan’s Sharp Corporation will likely be purchased by Taiwan’s FoxConn. It’s unprecedented that any foreign company – much less a Taiwanese/Chinese company – would take over a Japanese company. As for how this would affect Sharp’s copier/MFP group, it’s really too early to tell.

In other news, in the wake of recent news that Xerox would split into two companies, Xerox CEO Ursula Burns revealed in a Goldman Sachs Technology and Internet Conference some good news and some bad news.

The bad news is that the company will cut some $2.4 billion in operations in the next three years, and that revenue will be down from 2 to 4 percent for the year, with the document technology group down about 5 percent – but with Burns noting that this is pretty much business-as-usual. The good news is that a sale doesn’t seem to be in the works, with Burns commenting: “We’re still not pursuing an outright sale of the company.” But Burns noted that “reasonable offers” will be considered.

We’re impressed – Epson reports that it’s sold over a million ink-tank printers in India, and that this has happened in spite of the fact that they cost approximately 40-percent more than their cartridge-based counterparts. We’ve long contended that this will happen in locations where users better understand Total Cost of Ownership and how Cost per Page greatly affects Total Cost of Ownership. Moreover, we’ve contended that most users, such as small-business owners, outside of the United States are not: 1) biased towards laser printing; 2) aren’t willing to pay a premium for small-business toner devices at a cost that’s approximately three-times the color Cost per Page of cartridge-based inkjets, and approximately 15-times the cost of CISS inkjet); and 3) consume approximately 20-times more electrical power in the process. 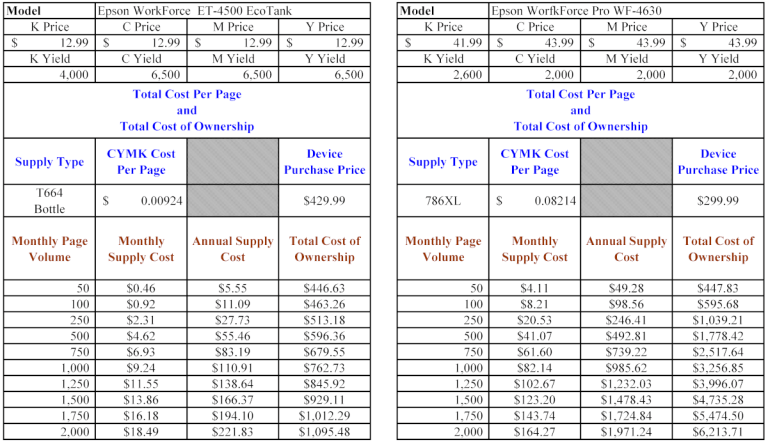 From our recent “Five Ways to $ave on Ink” study.