We’ve been hard at work in 2014 keeping on top of  the many important events and trends in the printer and copier/MFP industry. Overall, the major trends and developments in 2014 include: a modest overall worldwide recovery for sales and shipments of printers and copier/MFPs; much improved financial results from many Japanese vendors; and the growth of business inkjet printers and All-in-Ones in the office, as well as the growth of high-speed inkjet printers for production and commercial printing. Other trends include several printer/MFP vendors dipping their feet into the 3D-printer market, while two big stories were the split-up of Hewlett-Packard into two companies, as well as Samsung’s gains in the desktop and office MFP market.

After several years of shipment declines, the worldwide hardcopy printer and MFP/copier market began a modest recovery in the second quarter of 2013, reported market-research firm International Data Corporation (IDC), returning to growth in the third quarter of 2013, and maintaining growth into the fourth quarter of 2013. Although growth has been modest – in the single digits – and office printing has continued to gradually decline – printer and MFP shipment growth has continued for several consecutive quarters.

While Hewlett-Packard has continued to maintain its mantle as the world’s largest printer vendor, according to the most units sold, other vendors have made some notable gains, including Epson and Brother International.

In August, however, IDC reported a slight decline in worldwide shipments for second-quarter 2014, with growth down -2.3 percent year-over-year. A surprise in the second quarter was Samsung overtaking Hewlett-Packard as the laser-printer market leader in Western Europe. According to IDC, “Samsung is very strong in the low-end, and tends to market its products on price. It also has strong operations in Germany and Italy, where it performs particularly well. In addition, distributors and dealers tend to trade HP and Samsung off with each other and sales fluctuate as a result.”

Earlier in December, IDC again reported a slight decline in worldwide shipments, but this was offset by growth in shipment value of 3.5 percent year-over-year – so that while fewer units were shipped, those that were were higher-priced.

The lower value of the yen this year has been good news for many Japanese vendors, as this makes Japanese products more affordable overseas, thus making them more attractive to potential customers. The lower-value yen, combined with robust office printer and MFP sales, was the theme in 2014 for vendors such as Ricoh, Konica Minolta, Sharp, OKI, and Epson.

In the United States, Lexmark International maintained steady good results during the year, while Eastman Kodak reported much improved performance, with Kodak returning to profitability in a landmark third quarter. For Hewlett-Packard and Xerox, it was a bit more up-and-down – but note that neither of these U.S. vendors enjoyed the effects of a lower-value yen that their Japanese counterparts did.

A 3D-printed shoe shown to us at a Konica Minolta conference in July.

One of the buzzwords of the year has undoubtedly been 3D printing, and in 2014, several vendors announced that they’d either be marketing 3D printers (typically designed for professional, not consumer use) from either third-party vendors or would be bringing their own 3D printers to market.

By our tally, these vendors include:

HP previewed its first 3D printer, the Multi Jet Fusion 2, in New York to much fanfare.

As for Xerox, it’s reportedly a developer for 3D-printer maker 3D systems, while Samsung is said to be in no hurry to enter the 3D-printer market.

Reflecting the weakness of the consumer-printer market in the last several years, several vendors have been taking color inkjet into the office. Wirth Consulting has tested many of these business inkjet printers and All-in-Ones over the last several years, and observed that image quality and print speed are now on par – and sometimes better – than that of laser-based counterparts. At this point, many inkjets’ Cost per Page and Total Cost of Ownership are more affordable than that of comparable laser-based units, as is ease of use and maintenance. Two areas where inkjet shines is exceptionally easy maintenance and low power consumption. With maintenance, ink cartridges are invariably very easy to replace – users typically just pop-out the old cartridge and pop-in the new one – and there’s no image drum, fuser units, transfer belt, etc. to replace. Second, power consumption is notably less than that of comparable laser-based units – with inkjet units typically consuming about one-tenth the power of laser-based units. A requirement for many offices, these business inkjets also support more advanced management solutions, as well as support for third-party managed print services’ solution for tracking usage and maintenance.

This year, two vendors, Hewlett-Packard and Epson, were particularly notable in bringing business inkjet to market 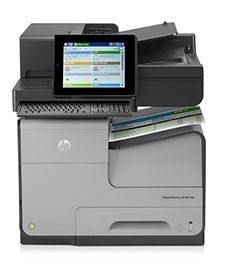 There’s a lot here to entice office users: cost per page of 1.0 cent for black, and 5.2 cents for color, 72 ppm print speed in “General Office” mode (42 ppm in “Professional” mode), manageability with Web JetAdmin, FutureSmart firmware upgradability, solution add-ons, and even a hardware-integration pocket (HIP) for adding a card-authentication reader for restricting usage.

Also in March, in Europe, Epson introduced new business inkjets, the WorkForce Pro 3000, 4600 and 7000 , which Epson  says can go 75,000 pages without the customer having to purchase new ink. Part of the configuration includes bags of inks (below) that are used to refill ink tanks when they become depleted. Read our story here.

In the business-inkjet market, other big news included:

These vendors are typically promoting inkjet’s lower cost of operation and easier maintenance, but are also positioning these units as supplements to much higher-volume A3 office MFPs. While the 1990s and 2000s were all about vendors centralizing print, copy, scan, and fax in a high-volume MFP located some distance from the user, these days, these vendors are seeking to bring office-imaging back to users’ desktops and small workgroups.

In the commercial- and production-printing market in 2014, the big news was the growth of high-volume inkjet printers. In May, IDC reported that high-speed inkjet printing will continue to dominate the global continuous-feed production-printing market (see here). According to IDC, the much-anticipated shift from laser, toner-based printing to high-speed inkjet “came to fruition in 2013, and will continue through the 2014-2018 forecast period. Placements of both monochrome and color-laser equipment declined in the past year, while high-speed inkjet “installations continue on their growth path. IDC expects HSIJ to (high-speed inkjet) to reach $1 billion in equipment sales by 2018 with a compound annual growth rate (CAGR) of 10.8 percent.”

In September, it drew notice with it MX series A4 and A3 MFPs that feature the first Android-powered user interface, along with a tablet-style control panel/touch screen for exceptional easy use (see here for more). Since its entry in the U.S. market in 2012, Samsung now has over 100 dealers carrying its printer and MFP line, including RJ Young (Samsung’s 2014 Dealer of the Year), DocuTrend Imaging, LDI Color, Modern Office Methods, Ray Morgan, and EO Johnson.

Mobile printing is now more than just an add-on for printers and MFPs, it’s a requirement. The Mopria Alliance, formed in late 2013 by such industry stalwarts as Canon, HP, and Xerox, is designed to address this, and to help members make mobile printing as easy and ubiquitous as possible. In 2014, Mopria Alliance members introduced a number of Mopria-certified printers – all with end-goal of making mobile printing as easy as possible for end-users using all platforms.

These stories don’t fit into any of the categories above, but we think they’re critical in understanding where several major players are headed.

First of course is HP’s decision to split into two companies, one dedicated to enterprise solutions, the other to PCs and printing (see here for more). For the new PC and printing company, it may mean that revenue from printing – which in the past was often used for other divisions – may be put back into printing. A few weeks earlier, HP also introduced a significant security platform for securing printers and MFPs, noting ominously that printers are most overlooked security vulnerability in the office (see our story here.)

Also in September, Xerox made one of its most important hardware announcement in the year – announcing a new managed print services program for small businesses for which MPS programs typically haven’t been available. Along with this were new Xerox ConnectKey MFPs for small and mid-size businesses (see here for more).

Last but certainly not least, virtually, everyone has jumped onto the MPS bandwagon at this point. What we’re seeing now however is an attempt to move beyond MPS and get deeper into the customer’s network and document-workflow itself. That means most vendors are now no longer just printer and MFP hardware providers, but in some cases are managing the customer’s network itself, such as Konica Minolta All Covered division, and, in Xerox’s case in particular, are taking over very complex processes, such as healthcare-insurance administration.

Last but not least, while we’re still far from a “paperless office” – and we personally doubt that this will be possible for quite a while to come – vendors continue to bring to market solutions that, while they don’t eliminate paper, can reduce its use, and perhaps even more importantly, enable enterprises to integrate or convert paper-based workflows into electronic ones.

What’s your take on 2014 for the industry? Feel free to leave a comment.